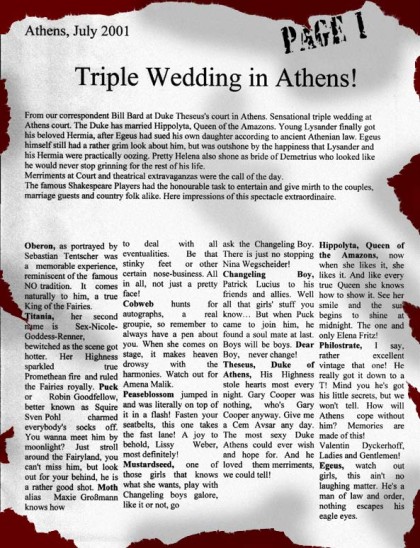 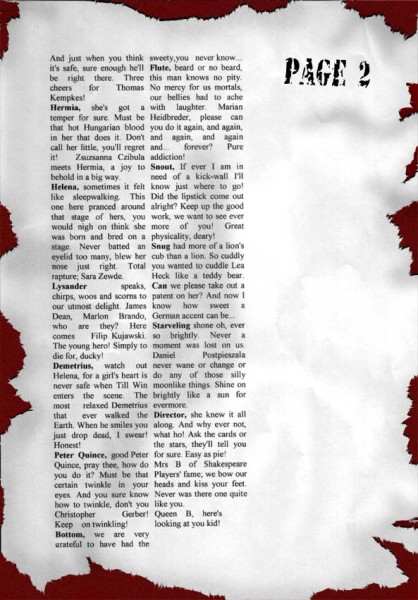 From our correspondent Bill Bard at Duke Theseus' court in Athens. Sensational triple wedding at Athens court. The Duke has married Hippolyta, Queen of the Amazons. Young Lysander finally got his beloved Hermia, after Egeus had sued his own daughter according to ancient Athenian law. Egeus himself still had a rather grim look about him, but was outshone by the happiness that Lysander and his Hermia were practically oozing. Pretty Helena also shone as bride of Demetrius who looked like he would never stop grinning for the rest of his life.

Merriments at Court and theatrical extravaganzas were the call of the day. The famous Shakespeare Players had the honourable task to entertain and give mirth to the couples, marriage guests and country folk alike. Here impressions of this spectacle extraordinaire.

Oberon, as portrayed by Sebastian Tentscher was a memorable experience, reminiscent of the famous NO tradition. It comes naturally to him, a true King of the Fairies.

Titania, her second name is Sex-Nicole-Goddess-Renner, bewitched as the scene got hotter. Her Highness sparkled true Promethean fire and ruled the Fairies royally.

Puck or Robin Goodfellow, better known as Squire Sven Pohl charmed everybody‘s socks off. You wanna meet him by moonlight? Just stroll around the Fairyland, you can’t miss him, but look out for your behind, he is a rather good shot.

Moth alias Maxie Großmann knows how to deal with all eventualities. Be that stinky feet or other certain nose-business. All in all, not just a pretty face!

Cobweb hunts for autographs, a real groupie, so remember to always have a pen about you. When she comes on stage, it makes heaven drowsy with the harmonies. Watch out for Amena Malik.

Peaseblossom jumped in and was literally on top of it in a flash! Fasten your seatbelts, this one takes the fast lane! A joy to behold, Lissy Weber, most definitely!

Mustardseed one of those girls that knows what she wants, play with Changeling boys galore, like it or not, go ask the Changeling Boy. There is just no stopping Nina Wegscheider!

Changeling Boy, Patrick Lucius to his friends and allies. Well, all that girl‘s stuff you know... But when Puck came to join him, he found a soul mate at last. Boys will be boys. Dear Boy, never change!

Theseus, Duke of Athens, His Highness stole hearts most every night. Gary Cooper was nothing, who’s Gary Cooper anyway. Give me a Cem Avsar any day. The most sexy Duke Athens could ever wish and hope for. And he loved them merriments, we could tell!

Hippolyta, Queen of the Amazons, now when she likes it, she likes it. And like every true Queen she knows how to show it. See her smile and the sun begins to shine at midnight. The one and only Elena Fritz!

Philostrate, I say, rather excellent vintage that one! He really got it down to a T! Mind you he’s got his little secrets, but we won’t tell. How will Athens cope without him? Memories are made of this! Valentin Dyckerhoff, Ladies and Gentlemen!

Egeus, watch out girls, this ain’t no laughing matter. He’s a man of law and order, nothing escapes his eagle eyes. And just when you think it’s safe, sure enough he’ll be right there. Three cheers for Thomas Kempkes!

Hermia, she’s got a temper for sure. Must be that hot Hungarian blood in her that does it. Don’t call her little, you’ll regret it! Zsuzsanna Czibula meets Hermia, a joy to behold in a big way.

Helena, sometimes it felt like sleepwalking. This one here pranced around that stage of hers, you would nigh on think she was born and bread on a stage. Never batted an eyelid too many, blew her nose just right. Total rapture, Sara Zewde.

Lysander, speaks, chirps, woos and scorns to our utmost delight. James Dean, Marlon Brando, who are they? Here comes Filip Kujawski. The young hero! Simply to die for, ducky!

Demetrius, watch out Helena for a girl‘s heart is never safe when Till Win enters the scene. The most relaxed Demetrius that ever walked the Earth. When he smiles you just drop dead, I swear! Honest!

Peter Quince, good Peter Quince, pray thee, how do you do it? Must be that certain twinkle in your eyes. And you sure know how to twinkle, don’t you Christopher Gerber! Keep on twinkling!

Bottom, we are very grateful to have had the pleasure of witnessing all royal command performances you deigned to present us with. I would have let you play the lion, too, for sure! Bravo Jan Pohl!
Keep up the good work, sweety, you never know...

Snout, If ever I am in need of a kick-wall I’ll know just where to go! Did the lip-stick come out alright? Keep up the good work, we want to see ever more of you! Great physicality, deary!

Snug, had more of a lion‘s cub than a lion. So cuddly you wanted to cuddle Lea Heck like a teddy bear. Can we please take out a patent on her? And now I know how sweet a German accent can be...

Starveling shone oh, ever so brightly. Never a moment was lost on us. Daniel Postpieszala never wane or change or do any of those silly moonlike things. Shine on brightly like a sun for evermore.

Director, she knew it all along. And why ever not, what ho! Ask the cards or the stars, they’ll tell you for sure. Easy as pie!
Mrs B of Shakespeare Players' fame, we bow our heads and kiss your feet. Never was there one quite like you. Queen B, here’s looking at you kid!
﻿